Health and Safety in Retail: What can we learn from sailing trips and clubbing attire?

This blog was guest written by Emmanuel Aublet, who has been a pivotal figure in shaping the retail and restaurant industries over the past decade. Emmanuel is the former President at Pizza Hut France, former General Manager for France, Belgium and French Switzerland at Subway and recently broadened his career by writing his first novel!

“Men over board on starboard!”

The call came from the RIB (rigid inflatable boat) recovery area of the war ship. Time froze; I was the Officer of the Watch; it was dark, visibility was poor and the Adriatic sea was freezing on this January evening… I yelled “Starboard stop”, grabbed the MOB (man overboard) board, and ran to the starboard wing. There, I checked the procedure I knew by heart. The captain arrived on the bridge and observed as I maneuvered the ship in the right position to recover the sailors.

Every member of the crew had gone through MOB training on a weekly basis since we had left our home port; we all knew what to do and when to do it perfectly. Yet, at every level, we each had written procedures to follow in order to make sure that we did not forget something essential in the heat of the moment. Talking about heat, the four sailors were recovered shivering but otherwise fine!

I was fuming in front of a slightly annoyed storage director: “Why are some of the guys not wearing their uniforms? Why are they even wearing sneakers?”

It was my first day as a general manager of a 15,000-square-foot store and I intended to have an impact!

The storage manager sighed and told me that H&S wasn’t very high on my predecessor’s agenda, very much focused on slashing expenses: “They have two sets of clothes and their safety shoes are horrible!”

“Well, this has to change” I said, “Tell me how much you need and I’ll get it for you!”

The next day, we toured the storage area and he said: “here’s the quotation for the uniforms. As for their shoes, could I suggest something different? Let’s give them a budget and they can choose their own models from our approved supplier.”

I didn’t care as long as they wore them: I nodded.

From that day on, I never found one of the storage guys lacking! I even learned that during an end-of-year party, some of them actually wore their cool safety shoes out clubbing!

You want the teams to follow H&S rules? Involve them (truly)!

The organization was so ferociously trying to understand the causes for close calls that it turned inquisitive; a colleague of mine, having done everything right according to the police, was involved in a car accident. Every single cause of the accident was attributed to the other driver.

Yet, my colleague underwent an interrogation that lasted several hours. One manager involved in the investigation told us: “If you get into a car accident, don’t declare it! You’ll never be as clean as your colleague was…”

The risk pyramid only works if all close calls are recorded…

Sometimes these things happen and instead of trying to attribute blame, celebrate everything that was done well!

The most health & safety-conscious companies are surely the most profitable: they care more about their people, their assets, their customers, wherever they might be…

Even clubbing at three in the morning!

Want to learn more about how to create the best possible workplace culture for retail store teams?  We surveyed 1,400 frontline employees to find out what they want most from their employers in 2022. 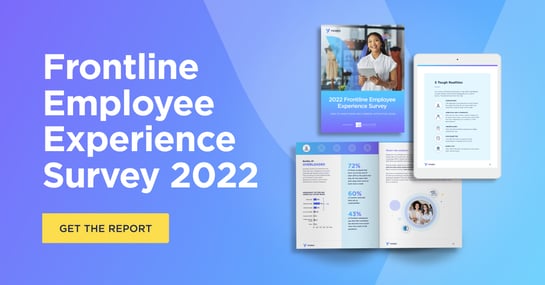 The 3 Top Qualities of a Great Sales Associate, and the Retailers Getting it Right

The 3 Top Qualities Of A Great Restaurant Employee